Are we really doing the best we can for our students?

"I have never let schooling interfere with my education"

Our education system represents a majority of the State of Iowa's total budget.

It's also where Iowans entrust their children's future.

Knowing this, I've always made addressing education issues my #1 priority.

As a freshman legislator, I refused to vote for any additional education dollars until we engaged in a serious discussion of our education policies.

In the last ten years, Iowa has added almost $1 billion new dollars to our education system. The money just keeps going up and up. 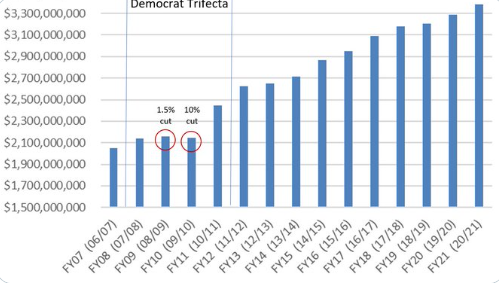 But all the new money in the world won't help if there are fundamental flaws in our approach.

After first being elected, I was appreciative for the opportunity to tour our local school district in January of 2019.

While it was uplifting to connect with students well on their way to pursuing their dreams, I was also concerned with many other glaring problems.

The first was the "isolation room" at the elementary school, where they place children having behavioral episodes. It was essentially a cold concrete closet.

The superintendent informed me the most recent child confined to the room had a left a puddle of piss for an associate to clean up.

I began to understand why so many teachers are leaving the profession...

I was most anxious to see the lunchroom.

My fondest memories as a student, and still my greatest joy as an adult remains sharing lunch with friends.

I was eyeing for the simplest and tiniest suggestion I could make to leverage the most positive impact for our children...

A bowl full of margarine servings immediately caught my eye -- hydrogenated soybean oil -- for children to compliment their mashed potatoes.

Margarine was initially sold to the public decades ago as a heart-healthier and cheap substitute for butter, but science now knows this is far from true.

Some people openly question if margarine can even be considered "food."

I expressed these thoughts openly, determined to improve the health of our children and the quality of their school experience with simple and essentially unnoticeable dietary upgrades.

What would it take to replace margarine with butter?

(and/or other vegetable spreads with less toxic effects)

Like every other suggestion ever made to the public school system, my line of inquiry was only met with insurmountable explanations on why my request was impossible.

As expected there are cost restraints, margarine is less than a penny a serving.

Also potential food allergies to dairy, while barely existing when I was a kid, allergy concerns now govern a lot of school policies.

But the biggest hurdle:

Each and every meal served in school is audited by the state to ensure compliance with the federal standards.

Saturated fats, trans fats, and just about every other factor is calibrated to adhere to whatever meaningless standards are agreed upon by bureaucrats and special interests in Washington DC.

These federal standards put an oversized emphasis on carbohydrates and legumes, with very little allowance for protein or healthy fats.

Most everyone recognizes now healthy fat can essentially be seen as "brain food".

Unfortunately, our state and federal laws prevent students from accessing such brain foods in school, instead forcing them to eat toxic margarine and fill themselves with other empty calories.

We make so much delicious bacon in our state. I'd really prefer to see our children eating some of that bacon in our schools rather than selling so much overseas.

Thinking back to my time as a student, I'd be a lot more excited to get to school if there was a sizzling plate of bacon waiting for me.

Right now kids are being met at school with sugary cereals, processed carbs, and other fake ingredients.

Is it really any wonder so many kids can't behave right and are afflicted with diabetes and obesity?

I was thankful to see a salad bar in the middle school cafeteria. But the vegetables weren't palatable, sort of tasted like they'd been sitting on a truck for a few months.

So of course there were generous portions of soybean oil and corn syrup dressing to wash the taste of stale broccoli.

Sorry for being snarky, I'm not blaming anyone. We've created laws and rules that place our schools in an impossible position.

But it's time we call our school lunchrooms what they are: a public health disaster.

I know not everyone will appreciate the importance of this topic or agree with my urgent warnings.

But suffice it to say, there is TREMENDOUS room for improvement, and science has consistently demonstrated small changes can make gigantic impacts.

Bringing Education into the 21st Century 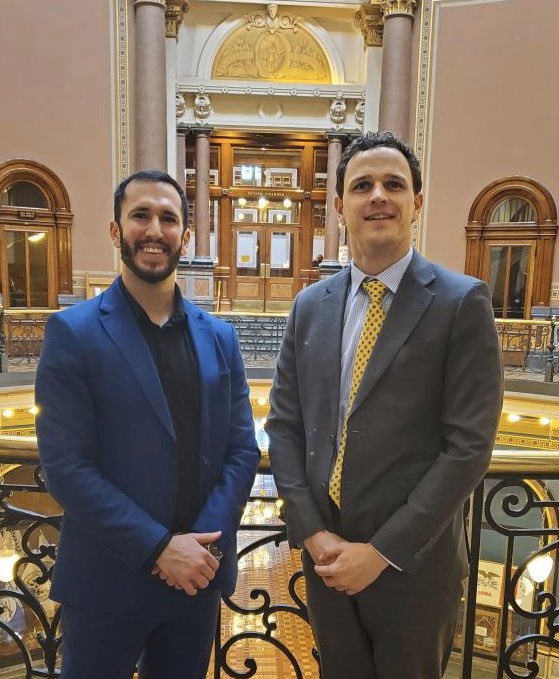 I'm thankful the Governor is taking the lead on addressing school choice proposals, working to ensure each and every child in Iowa gets the education they deserve.

I'm deeply saddened by the sheer volume of flagrant distortions and unsubstantiated attacks on the Governor's education bill.

Every rambling and incoherent email I get from a so-called "educator" only affirms my commitment to debating these policies in front of all Iowans, and enacting sorely needed education reforms.

As I mentioned before, our school system is very expensive and represents a gigantic share of your overall tax burden. So we better make sure it's working right.

Below are some of the claims being circulated by the special interest groups threatened by reform:

FALSE:
“This bill is going to destroy the public education system in Iowa.”

The Students First Act has the potential to elevate the quality of all Iowa schools. School choice can serve as a motivator for low-performing schools to improve the educational experience they offer, attract and retain students, and empower their communities. When a school is failing a child, a parent should be able to choose a better option for their family. The Students First Act offers the following solutions:

FALSE:
“This is just another move by the Republicans to defund education in Iowa.”

Republicans are responsible for record high education investments over the last decade. In fact, the last time funding for public education was actually cut was in 2010, under a Democrat governor and a Democratically-controlled legislature.

FALSE:
“This is nothing more than a voucher program that sends public money to private schools.”

This is a scholarship program, NOT a voucher program. The Students First Scholarship is awarded to a student’s family and used at their discretion to cover a variety of approved educational expenses that can include tutoring, educational therapies or tuition. The scope of the scholarship program is targeted and narrow. It is available ONLY for children currently in or enrolling for Kindergarten at one of Iowa’s 34 failing public schools, and enables families to choose a better option for their children’s education.

There is NO impact to teacher salaries under this bill. Currently, the state provides school districts with funds for teacher salary and leadership supplements to be awarded at a school’s discretion. However, those funds often go unused and are returned to the general fund. Instead, the Students First Act would authorize schools to transfer the unused funds to their flexibility account, where they can be used to implement enhanced educational opportunities to benefit students, such as work-based learning, computer science or STEM programs .

The cost of this program has been grossly exaggerated. The Department of Management calculates the cost of the Student First Scholarship program at $1.1M to $2.7M and, according to the nonpartisan Legislative Service Agency (LSA), the program’s net cost is $200,000.

"Kids who attend voucher schools and charter schools do much worse than kids who stay in public schools.”

Research shows that school choice has a positive impact on academic achievement. The Students First Act has the potential to elevate of all Iowa schools and motivate low-performing schools to better serve their students, families and communities.

Both public and non-public schools in the state of Iowa are accountable to the Iowa State Board of Education and Iowa Code. In order to be approved by the Iowa Department of Education, non-public schools in Iowa must meet or exceed the minimum requirement standards put into place by the Iowa State Board of Education in Iowa Code. School approval can only be executed with a comprehensive on-site visit or through a state-approved independent agency.

Student First Scholarships will be created in the state treasury under the control of the Department of Education to maintain checks and balances. Furthermore, the Students First Act also gives the State Board of Education the direction to refer cases of misuse of funds to the Iowa Attorney General.

FALSE:
“This bill is racist and discriminatory towards minorities.”

The Students First Act offers opportunities for all Iowa students, regardless of race, ethnicity or income, by removing barriers such as voluntary diversity plans that prevent families from choosing the school that’s best for them.

The Iowa Senate has already passed the Governor's proposal. Our work will be to build consensus among Iowa House Republicans in the week ahead. 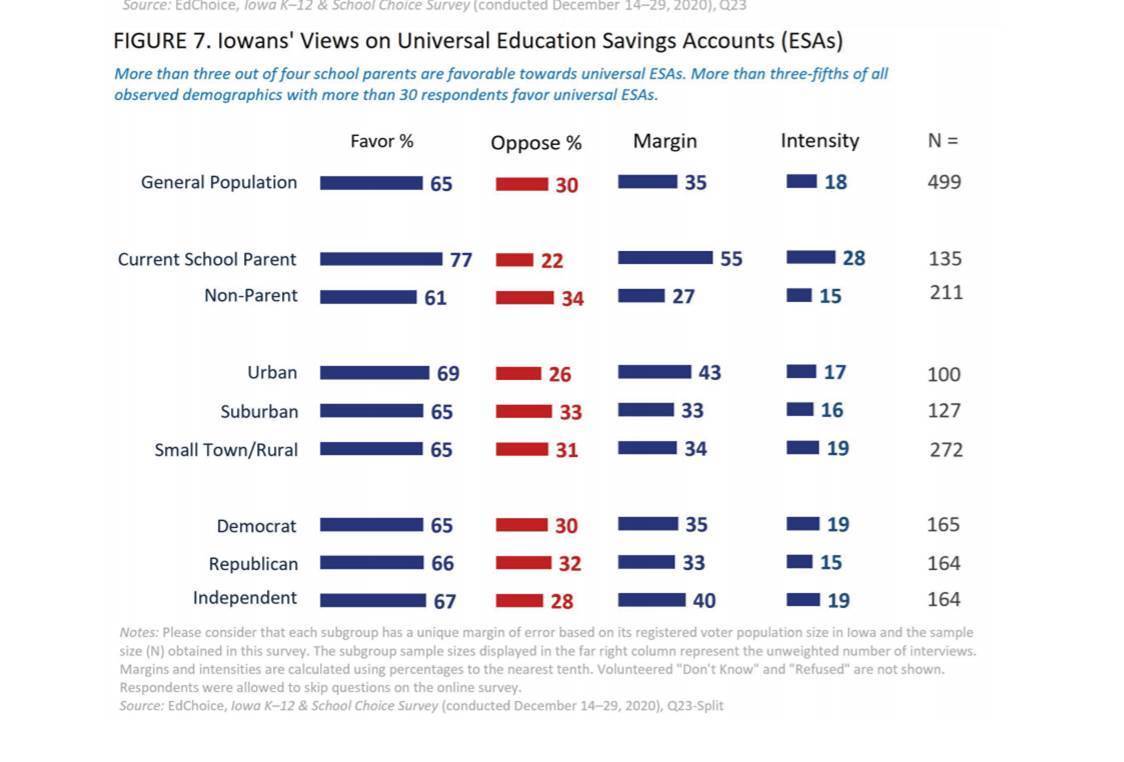 Parents are literally begging for school choice because so much of what happens in schools resembles indoctrination rather than education.

This was the curriculum for students in Ames Community School District this past week: 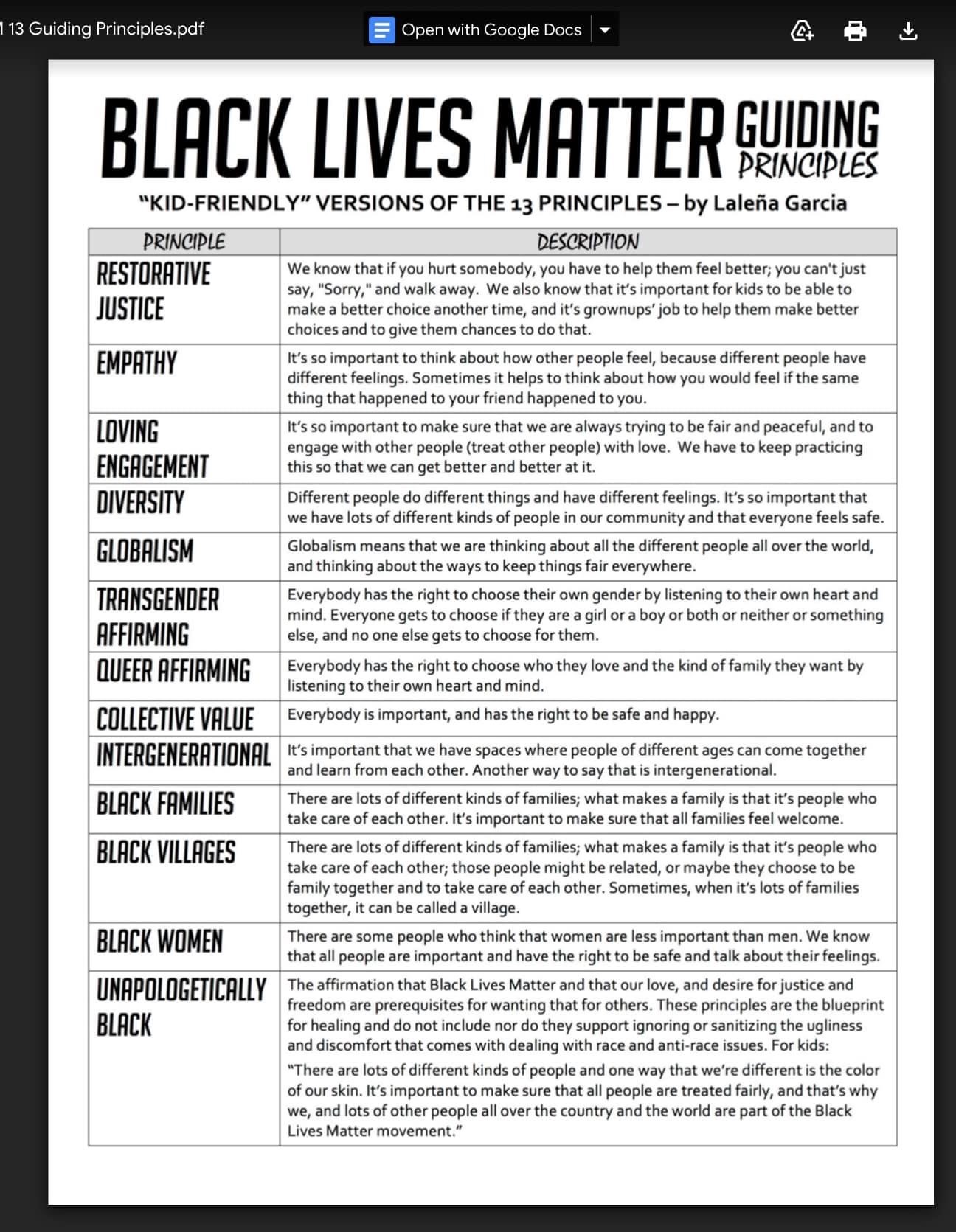 Obviously students must be exposed to all viewpoints, but it must be done in a neutral manner.

The role of education is to teach a child how to think, not what to think.

I am quite flummoxed by my Republican colleagues who are not eagerly supporting this idea. Crazy to see Republicans side with the radical and extreme teachers unions, who've hyper politicized our classrooms and used our children as political weapons, versus our beloved Governor Kim Reynolds.

The only conclusion I can come to is they're either ignorant of the real problems in our school system, or how much tax-payer money is truly on the table.

Reviewing the adopted 2021 budget for Fairfield CSD...
Total Revenues: $27,417,454
Enrollment: 1,549
That equals $17,700 per pupil.
If you add in the beginning fund balance of $10,244,360, that brings the "total resources" to $37,661,814...
or in other words, $24,313 per pupil.
That's A LOT of money no matter how you slice it...
Sadly, despite all this money, school boards have proven they can't handle the responsibility. It's not all their fault, the state and federal laws governing our schools are atrocious.
Parents must be able to decide what's best for their kids.
It's time to open these resources up so each and every student can get the education they deserve.

I pray House Republicans can figure it out. 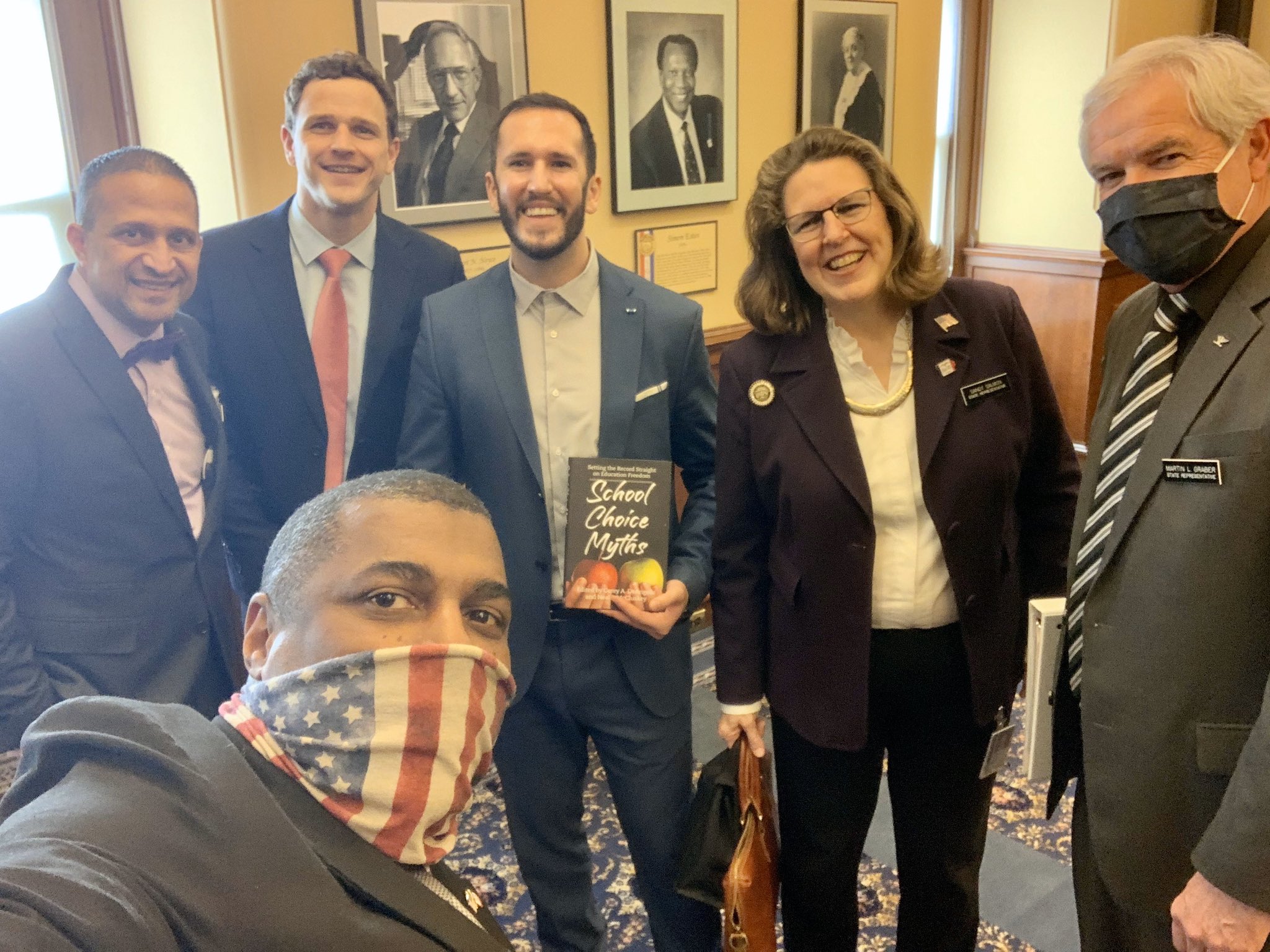 Rep. Stone and I expressed our excitement over the new frontier of education possibilities by chest bumping.

Sincerely Yours -- At Your Service,

Free and open to everyone!

Bring a dish to share, or just your appetite.

Organizing Iowans to support peace and freedom is tough! Your generous support will go a long way to advancing our efforts.

For anyone serious about making a difference in our community.