It's my intent to provide the most accurate and straightforward information.

Hence, I must make a correction to our voting comparison chart that was sent out yesterday afternoon. 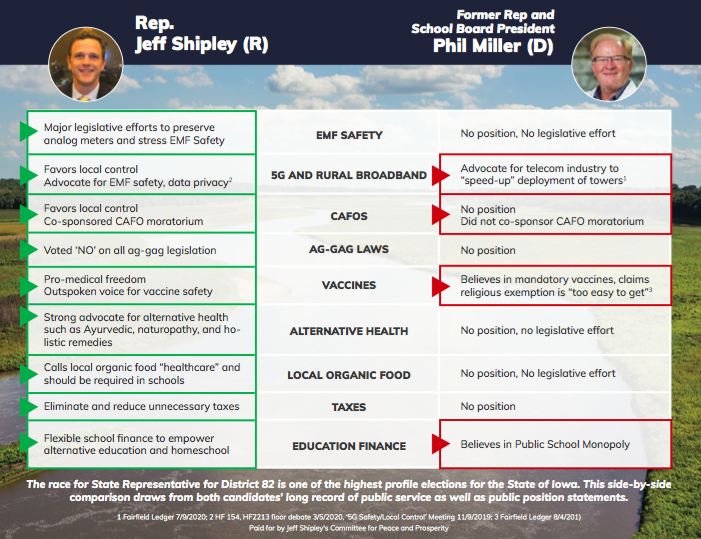 Under CAFOs, our opponent actually has this position listed on his website:


Our copies of this comparison have already gone to print, so I won't be able to make a correction on the hard copy.


After discussing it with the committee, we reached the following conclusions:

Industrial Livestock is a tremendously important issue as it speaks volumes on our relationship to our food, our environment, and each other.

I don't claim to know all the answers, I signed onto the moratorium because it was persistently requested of me and because I saw the need for improvement in the siting of facilities.

I was the only Republican, and the only rural legislator to do so.

At the time I signed onto the moratorium, I was told by plenty of people that I was making a big mistake that would cost me politically.

They're probably right, a lot of smart people said that.

And plenty of constituents have voiced their displeasure that I would possibly use the force of government to inhibit industry.

I think most of all, I'm interested in learning more about the tremendous trade imbalance we have with communist China, and how that impacts pork production.

I don't want a situation where China gets pork, foreign corporations get the profit, and Iowa is stuck with the pollution.

I hope that explains my goals and concerns in a way that can unite vegetarians and hog farmers.

Because we all must work together to create sustainable solutions, the Peace and Prosperity of Iowa depends on it.

P.S. Standing strong on these issues isn't always as easy as it looks. If you appreciate my voice and record of putting people before industry, please consider making your most generous contribution today!