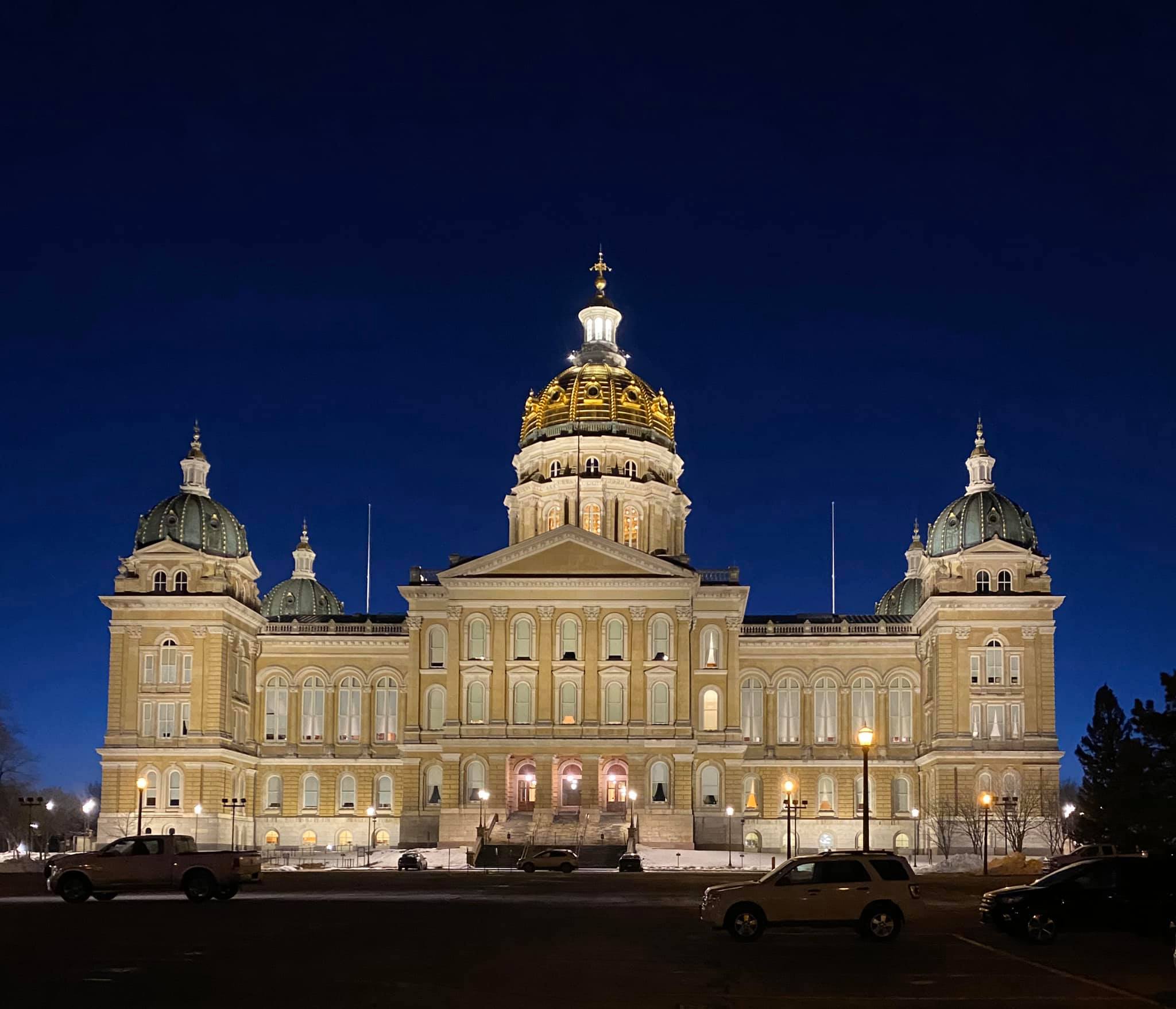 Our world is quickly changing, often it can feel disorienting.

We're approaching the one year anniversary of the COVID lockdown...

I admit I was among the naive on just how drastically our society can change in one short year.

I was also naive how easily basic freedom can be stripped, and ignorant on how much I had taken for granted.

Who would have guessed that seeing children attend school, play sports, or participate in a graduation ceremony were a luxuries that could be taken away?

Showing your face, sharing a smile with a stranger or offering a hug will likely remain "politically incorrect" for the foreseeable future.

Thankfully I was not naive to government's ability to wreck the public health through misguided policy and unscientific dictates...

However, I was naive to the volume of friends and neighbors eager to trust government authority, while abdicating any personal responsibility of their own.

It's especially surprising the number of self-professed conservatives and libertarians echoing thoughtless slogans,  kneeling before the newly minted woke public health gestapo, demanding your basic freedoms for vague promises of their security.

Our world is changing. The pace of change is accelerating... it will require every ounce of energy to keep up.

The process of evolution is always unfolding, in every cell of every organism in every moment.

Our Evolution is merely a function of letting go of what is no longer working, and adapting to new circumstances.

Addressing the challenges of 2021 with a 2020 mindset will not be effective.

I hope Iowans can grasp this concept -- thankfully the new generation of leaders is beginning to emerge. 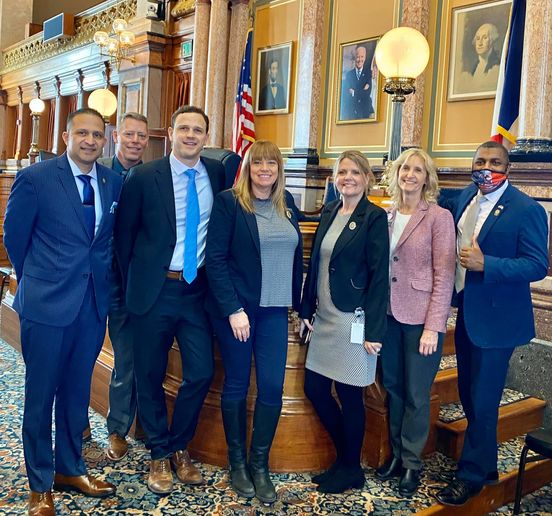 Honored to work with so many leaders devoted to Iowa and the Land of the Free!

One of the medical mysteries surrounding COVID-19 is the manifestation of "long-COVID," where a person survives a moderate case of acute COVID, but never makes a full recovery.

Medical observers have begun comparing the onset of long-COVID to an autoimmune illness.

There are many instances in our community of people experiencing this pathology.

The maintenance of health is equivalent to keeping the various aspects of your physiology in balance.

Testing positive for a virus, is not the same as expressing symptoms of a disease. One theory to explain, is the balancing mechanisms of the body keep the virus in check, preventing the manifestation of illness.

This delicate balance of biological mechanisms in the body, including all helpful and potentially harmful viruses, is called homeostasis.

Think of your body as one gigantic, hyper-complex see-saw with infinite fulcrums and levers... health prevails when all the interlocking pieces balance evenly back and forth.

I think it's vitally important we apply the philosophy of evolution to our own health, ensuring our innate immune system can keep up on the cutting edge and respond to whatever biological, virological contagions are present in our environment.

Our public health is deteriorating for our very eyes.

The foundation of our health has been completely eroded, leaving our entire population vulnerable in our new era of unrestricted biological warfare.

We must get back to mastering the basics.

A lot of people have none of these health items. Public health agencies omitting crucial and simple strategies to improve health are demonstrating why they are not to be trusted.

We have our work cut out for us. For more awareness on autoimmune disease, check out Dr. Terry Wahls 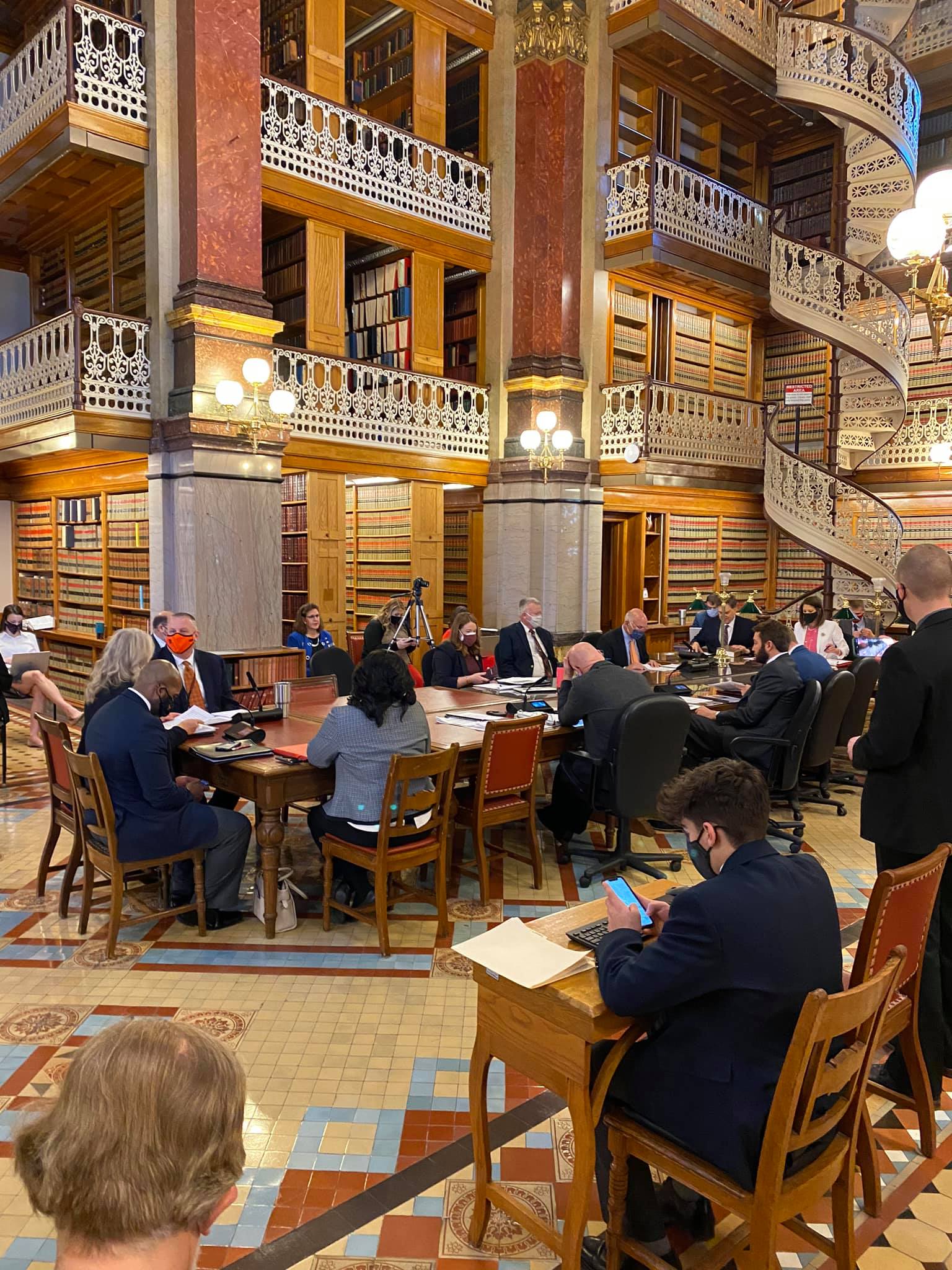 "Behold, I send you forth as sheep in the midst of wolves: be ye therefore wise as serpents, and harmless as doves."

This week, officials from the Ames Community School District met with Government Oversight after parents had expressed concerns with the controversial curriculum used in their Black Lives Matter at School Week in early February.

The materials uploaded to their website and distributed in their schools contained divisive language, one-sided political arguments and topics that were simply not age appropriate.

Ames School District used public resources for political purposes and may have even violated the civil rights laws.

During the meeting, it became increasingly clear that the officials were careless in their approach to this curriculum. They had not properly vetted the material they uploaded to their website for biased information, and even were unaware of some of the most concerning documents that were distributed in their schools.

The role of our public schools is not to indoctrinate, it's to educate.

The most alarming aspect of the hearing was how oblivious the superintendent claimed to be at the controversy she was causing.

Many educators expressed discomfort with the materials, but a culture of fear, bullying, and intimidation prevent them from speaking up.

Leftists respond to anyone who dares question the wisdom of teaching grade schoolers radical race and gender theories with accusations of racism and transphobia. It's an entirely toxic environment that stifles any potential for civil discourse... demanding conformity and obedience without question.

From my observation, the members of Ames CSD were smug and arrogant precisely because they realize the strength of their position, and the cowardice and incompetence of those who oppose them.

Again, we have our work cut out for us. I admit I often question the capability of my colleagues to confront these extremely difficult and pressing issues, however I'm thankful for Rep. Holly Brink for her steady leadership through the proceedings.

"Our Liberties We Prize and our Rights We Will Maintain"

Given everything we've experienced the last year, the most important issue I wish to address as your State Representative is preserving and protecting individual liberty at all times, but especially during a declared emergency like the one we still presently find ourselves.

Exactly what is the boundary between security and freedom, government and personal health decisions?

Right now there appear to be no boundaries. Government retains the right to dominate you completely.

This is best illustrated in Iowa Code 135.144 and 139A.8 4(b) which gives the department of public health complete authority over someone's life during a health emergency, whether they're infected or not.

Under this code section, the State of Iowa can legally require a person to submit to a vaccination during a declared health emergency.

Through many rigorous meetings and in-depth conversations, my colleagues and I arrived at a bill draft outlining specific protections for the rights and liberties of Iowans, as well as legislative checks and balances during times of emergencies.

We wanted to improve the laws relating to health emergencies... or at the very least, offer a starting point for this very important conversation.

The second week of February I submitted the bill drafts to the House clerk's office. Normally within 24 hours of submitting a bill draft to the clerk, it's officially 'read in' and introduced to the House.

Sadly, and quite unfortunate in my estimation, the Speaker of the House elected not to introduce these bills. 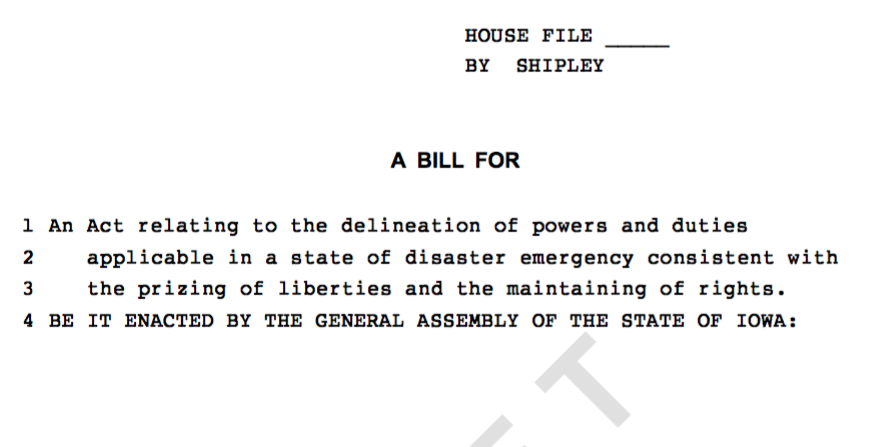 Some conversations are incredibly difficult, and it's simply more politically convenient not to have them.

I admit I was a bit frustrated, even angry, being stymied from introducing legislation on the topics most essential to human liberty.

But I also do my best to understand and comprehend complex political calculations and a long-term strategy.

As long as Iowans focus their hearts and minds on liberty, then our ultimate success is assured

A rising-sun world emerges with millions around the world stepping forward into truth, freedom, and genuine health...

...Acknowledging their true power as sovereign human beings, honoring the dignity of humanity and divinity of God... the miraculous splendor of glorious creation.

Thank you for being with me on this journey of human evolution through these most interesting times on planet Earth.

We are beyond blessed to live in Iowa.

HyVee Club Room - 1300 W. Burlington on the west side of the store

This week, Iowa House Republicans took additional action on child care by passing our 7th and 8th bills of the session to address the child care crisis.

HF 606 creates additional tax incentives for employers to invest in an onsite daycare option for employees.

This session, House Republicans have been aggressive in tackling the child care crisis facing Iowans.

Iowa continues to face a shortage of child care providers while having one of the highest rates of both parents in the workforce.

Another issue we heard about often on the campaign trail was the need to expand access to mental health in Iowa. This week, the House took action with two bills on the matter.

HF 294 requires health insurers to reimburse for mental health services provided through telehealth at the same rate as services provided in-person. This will be a huge help to all Iowans, especially those in our rural communities.

HF 773 is a bill to create a statewide study of Iowa's mental health services. This information will help identify opportunities to better serve Iowans suffering from mental illness. This is also the first step in requesting an 1115 Waiver from the federal government which would provide additional funds for services to treat mental illness.

This week, the House passed two pieces of legislation to support victims of sexual assault.

House File 426 creates a tracking system for sexual abuse evidence kits in Iowa. Any kit preserving evidence of sexual abuse after a reported victim undergoes a forensic medical exam will be entered into the system the moment of its manufacture and tracked until it is no longer needed. The bill also requires the victim be notified if a DNA match is found for a potential assailant.